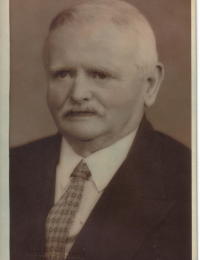 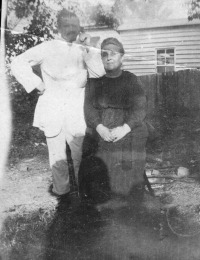 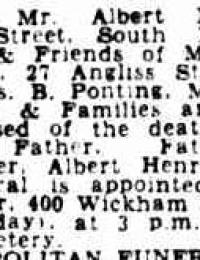 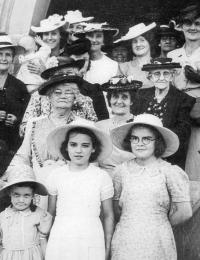 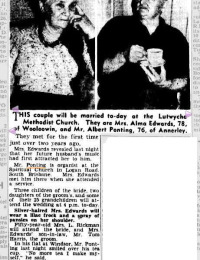 “Don’t forget to smile when the man takes the photos” my mother instructed me.  It was going to be an exciting day.  Grandpa was getting married for the second time.  My mother had bought me the prettiest lavender crepe dress and a new hat embroidered with pastel coloured flowers. When the cameraman took the photos, I smiled as instructed. Their photo was in the week-end newspaper as the newlyweds were both in their seventies. I was about five years old.

My mother and I visited Grandpa and my new Grandma regularly at South Brisbane. We caught the tram after school then walked the rest of the way. As we didn’t own a car, the tram was our main means of transport. I was anxious for my legs to grow as they dangled a long way from the floor of the tram.  I wondered why I would sometimes see a man with only one arm or leg sitting in the tram, but after a while I thought nothing of it.

Grandma’s son Roy lived next door with his wife and the three girls who I learnt were his daughters.  Grandpa’s room was towards the back of their boarding house.  I loved the sweet smell of his tobacco and wondered why he had so many pipes.

Each time we visited I would go down the back steps and find a place for myself under the house. There would always be a cardboard box full of comics for me to read.  The real world was a long way away as I escaped with Superman on his adventures.

On the way home we had to change trams.  We would visit a cake shop at North Quay where I was treated to the small cake. It was not easy to choose between the shiny pink pig with the curly tail, the cup cake with the colourful hundreds and thousands, or the butterfly cake.  I would remove my glove by gently biting the fingers and ease my hand out. The white serrated paper bag would yield its treasure.  It was against school rules to remove gloves or eat in public, but no one seemed to take any notice.

Grandpa had come a long way from his days in England with his parents Henry and Ann.  He was already a baker when he migrated to North Queensland with his wife and three children.  My mother helped him with his baking and she learned to select the exact amount of dough to make a loaf of bread. She was very proud that she could do this without the help of scales. She also handled the book-keeping, sold bread in the bakery and cared for her ailing mother.  The younger children also looked to her for help. Finally in 1932 my Grandma died.  My mother was 32. Grandfather continued with his bakery at Peeramon .

I suppose you could say my parents eloped.  They had first met over the bakery counter and a firm friendship developed. Then my father accepted a position as surveyor’s offsider at Rathdowney. This was a long way from Peeramon, but they wrote to each other regularly. Mother was coming to Brisbane in August for a holiday and to visit the Exhibition. . When she went back to the bakery she had her marriage certificate tucked safely away. . My mother was 34 years old and my father 40.  I don’t think my Grandfather ever got over the shock. He carried on his business minus his irreplaceable helper.

When he retired, Grandpa came to South Brisbane to live.  A couple of years after his second marriage he became infirm and entered the Eventide Home at Sandgate.  He died when I was nine

I can still picture my lavender dress, flowered hat, and smell the sweet smell of his tobacco.