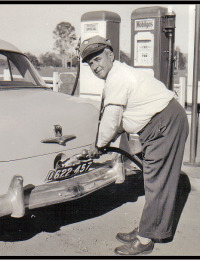 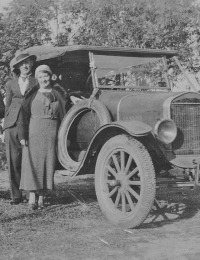 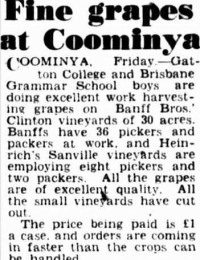 Samuel Milton Heinrich, youngest son of our grandparents’, was born at Blenheim on August 19, 1915. He attended the Blenheim State School.

In 1930 he left Blenheim with his parents for Coominya where his parents had purchased Sanville vineyard. He worked on the vineyard with other members of the family. In 1933 his parents were once again called to ministry and served at Kalbar Baptist Church until 1935. In 1936, his father died at age 60 and he continued to work at the vineyard.

While a resident of the Coominya district, Sam took an active interest in the work of the Atkinson Lagoon school committee, being chairman for a period of three years and a member for 5 years. Janet and Milton attended the school.

During the war years, Sam with his brother Dan, was a member of the Voluntary Defence Corps. They trained at the Lowood Airfield. They could not join the regular army because of their name “Heinrich”!! Sam’s first visit to Toogoolawah was when the VDC marched through the town. Impressed by the district, he later sold the vineyard and purchased a property owned by Mr G Kaddatz of Nanango Road Toogoolawah . The family carried on grape growing and dairying.

A fifth child was born while living at Toogoolawah, David (4 May 1953). David was injured in a road accident in front of the family home and passed away that night (17 February 1961). Sam and his brother Carl made a yearly pilgrimage to Amity on Stradbroke Island each August school holidays to fish and relax.In 1957, Sam erected a service station on the property which was called the “Red Horse Inn”.

Sam was an active member of the community being elected by the community to serve on the local ambulance committee. He also sang at community concerts and on 4IP Ipswich radio. While at Toogoolawah, the family attended the Baptist and Methodist Churches and the Baptist Church at Murrumba and Esk. Sam was active in the church, using his talents in singing, leading and taking services, and especially being Treasurer. He and Mum were always having people in need stay at our place. Several Baptist ministers boarded at our home and they looked after several other family members when they were in need.

In 1972 Sam and Lil sold the farm at Toogoolawah and purchased a house at 20 Allen Street, North Ipswich. A few years later they sold that house and bought a retirement unit at the Baptist home “Karinya” in Laidley and lived there serving the home and its clients until they died. Mum passed away on 12 February 1982 and Dad on 24 December 1984.