Today I have gained access to documents from the former Blenheim Baptist Church which I shall be transcribing and publishing. First cab off the rank:

A short while ago, the BLENHEIM and TENTHILL communities had to experience in rapid sequence sorrow and joy. General regret and sorrow were felt that brother C.KRUEGER, who had spread Gods Word for nearly seven years, had resigned and re­turned to America. It was hard to comprehend that such intimate and loving relations could be severed so harsh and abrupt. The communities felt orphaned,however, the Lord provided.

HE called brother and sister J.HEINRICH from DELMONT, SOUTH DAKOTA, AMERICA, to continue HIS work in Australia and led them safely across the ocean to our sunny Queensland.

On the 13th. of December a big and colorful crowd of Gods children assembled in the neat chapel of the Blenheim community. Accompanied by the melodies of choir and trombones, brother and sister HEINRICH were shown to the chapel and at entering were greeted by the congregation with a song of welcome. The undersigned formally introduced brother and sister HEINRICH , followed by the introduction sermon Ps. 122, 6-9 with the subject:”Obligations of community and reverend.”

On Sunday we listened to addresses by brother CARL KRUEGER -“responsible and earnest position of the reverend-” and by brother G.EHMKE “- do you want to travel with this man ? -” and to an address in English by brother J.HEINRICH.

The main celebration of the introduction took place on Monday afternoon. The undersigned welcomed brother Heinrich to the new country as the representative of the union and of the LOWOOD and MINDEN communities and brothers J.H.HAUSCHILDT and F. JACKWITZ continued with further hearty and welcoming words in the name of the BLENHEIM community and Sunday school. Other addresses of welcome followed: Brother K.KRUEGER for ENGELSBURG, brother G.EHMKE for MARBURG, brother OLM for TENTHILL the reverend H.ELLIOTT for the Baptist Association and finally the reverend A.G. SMITH for the Methodist church.

The program of the evening was composed and presented by the youth group of the Blenheim community, consisting of recitations, dialogues, choir- and solo songs. Reverend GALLOWAY, who was unable to attend the afternoon meeting, gave a hearty speech of welcome in the name of the Presbyterian community.

It was a real pleasure to be present at this event in Blenheim. The guests were entertained with two banquets under a big tarpaulin. Trombone band and choir contributed a great deal to the overall success.

May Zion be build here too – in faraway AUSTRALIA. 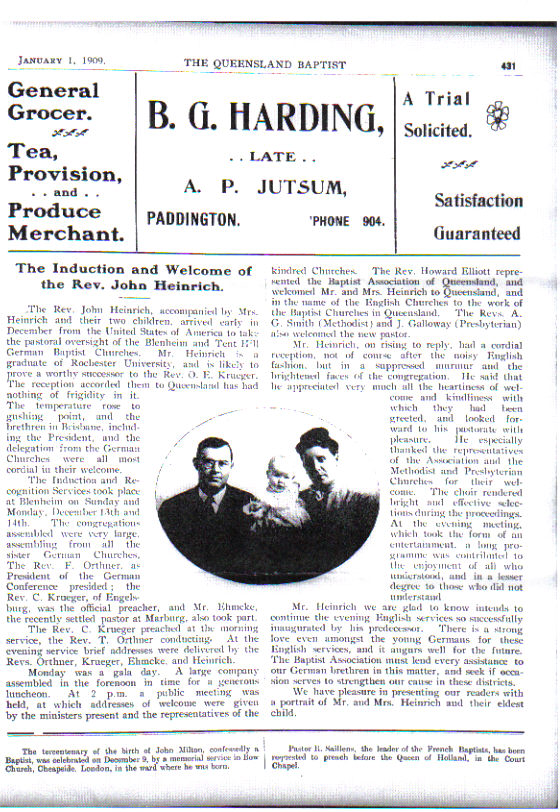 What happened to Charles Olm?